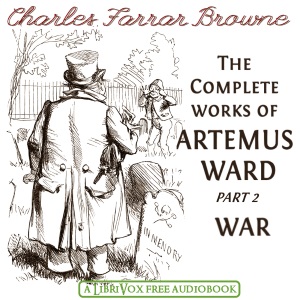 LibriVox recording of The Complete Works of Arteumus Ward Part 2, War. by Jefferson B. Browne.
Read in English by Delmar H Dolbier
Charles Farrar Browne, a native of Maine, became known as a writer and lecturer under the name of Artemus Ward. Like his friend Mark Twain, Browne worked as a type-setter in his youth and in 1858, began publishing a series of letters, essays, and stories told in the first person by a droll, illiterate rube with a good measure of subtle common sense who commented on the events and fads of the day. Taking his character to the stage as a lecturer, Browne became an early-day prototype of what we now name a stand-up comedian. Artemus Ward was such a favorite of President Abraham Lincoln that the chief executive read one of the Ward stories to his assembled cabinet officers before getting down to the business of discussing the proposed Emancipation Proclamation. Browne’s writings became popular in England as well as in America, and he travelled to Britain to perform his Artemus Ward lectures and contribute to the comic magazine Punch. Browne contracted tuberculosis and died at the age of thirty-two in Sothampton. (There was a real Artemus Ward, a general in the Continental Army during the American Revolution.) - Summary by Delmar H. Dolbier
For further information, including links to online text, reader information, RSS feeds, CD cover or other formats (if available), please go to the LibriVox catalog page for this recording.

Uploaded by librivoxbooks on January 18, 2018